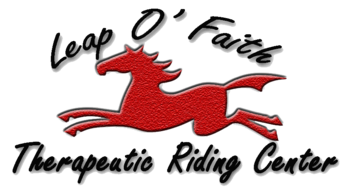 Please support them with your business.

Thank you to Our Sponsors!

I have known "J" since his birth. He is a very bright child with a severe speech and language barrier that prevents him from communicating with others. He has apraxia. I consulted with his speech language pathologist (SLP) to continue the same type of program that she had been using.  "J’s" SLP gave her blessing. I talked with "J’s" family and we began riding lessons in June of 2016. "J" was saying limited single words and for the most part not understood by family or friends. However, by October of 2016, "J" has advanced to saying three word sentences with meaning.

I have been a speech language therapist for 36 years in the Ada public schools. I began volunteering at Leap O Faith because I grew up with horses and wanted to combine my love of teaching speech and riding. I have worked for years the traditional way with other children before seeing these same type of results that "J" is having in so short a time. He will ride for an hour, totally engaged in the lesson. He has gone from not saying anything, to signing, to now saying, “Walk on” in only 5 months! When I heard him say, “Walk on” for the first time I wanted to dance, cry, and leap for joy all at the same time. Lately, he has advanced to saying, “Me ride Red” (one of the therapy horses) or “My Ted” (one of the volunteers.) I believe it is the action of riding or the natural crisscross pattern of the horse’s steps they helped "J's" motor planning with his apraxia. While he is riding, he is bombarded with a phonetic sound that his SLP has assigned for the week. I know each individual is different but "J's" progress is truly a miracle!

When "L" was four years old, she was diagnosed with anxiety, depression, conversion disorder, PTSD, and Trichotillamania. She was very clingy and would cry when being dropped-off at school as recently as this past year. "L" also had no eyelashes or eyebrows due to her pulling them out to cope with her feelings.

Then I heard about the Leap O' Faith program in Ada for kids with disabilities that used horses to help them cope with their disabilities. This program, and Kathy in particular, have been such a blessing for "L". She is off her medications, her eyelashes are growing back, and best of all, she smiles all the time now!

Leap O' Faith and Kathy have done what other therapies have not and given "L" her life back.

Once the arena was ordered, we had a good friend and fellow brother in Christ, Heath Briggs, come over and grade the plot for the new arena. His main task involved filling in an old, 15' deep, run-off pit that was on the west end of where we planned to put the structure. Fortunately, Heath is an old hand with an earth mover and he had it all done in two days. This was in late October.

All that was left was waiting for the day in late November for the ClearSpan crew to show up and start the construction. Unfortunately, on the week-end before they were going to start, another 7" of rain fell on the plot and turned it into a giant mud pit! When the crew arrived, their first vehicle, a giant boom-truck, sank to it's axles when it hit the ground. After spending about an hour to get it unstuck, they decided to come back when the ground had dried up; maybe in a month. We were dumb-founded. The rain had struck another devastating blow to us again...what was God up to?

Trusting God in the storm...

Over the last year, Oklahoma experienced more rain than it ever has since becoming a state. The flooding was a disaster not only for homes and businesses in low-lying areas but also for Therapeutic Riding Centers, who depend on good weather for their clients to ride in! In fact, there were so few days in which to ride that 2015 was a literal wash-out for us. We have been trusting all this time that God had placed us here for the purpose of using all our resources to assemble this special place, the Leap O' Faith TRC. We knew in our hearts He had a way around this issue; we just had to rely on the power of faith to overcome the rain, especially in case a "year of deluge" happened again.

So we prayed for a miracle...

We know rain is important to this area and something that we actually enjoy. We also knew it was ridiculous and unrealistic to ask for it to go away forever. If only we had a giant umbrella that was able to be over our clients. As silly as that sounds, that was the solution we prayed for. We didn't know where this giant umbrella was going to come from or who would hold it up for us, but we knew that was what we needed.

We looked at different types of arenas, but it didn't take long to discover that our budget just couldn't afford a traditional wooden or metal structure. So, our minds went back of the umbrella image, What if we had an arena made out of a metal frame but had sturdy fabric material stretched over it? That's when we came across ClearSpan, a company that made just that type of structure. We were very happy to find the cost was much more in the range our finances could handle. This was the answer we were looking for! 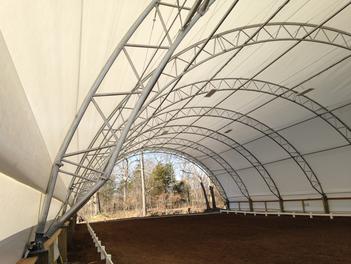 So, we went back to praying for clear skies. December was another rainy month and we felt very humbled during the Christmas season. We decided all we could do was focus on Christ and the amazing gift he had given us in Himself, which was far greater than even a covered arena.

Finally, 2015 was behind us...and so were the torrential rains, though, in Oklahoma, you never know when the winds might change and send an unexpected storm your way. Still. the ground had dried up by mid-January and we were on the phone with ClearSpan, begging with them to send out another crew while there were clear skies. Finally, they arranged for the construction to begin...just as the weatherman said another storm front was headed our way! Oh, Lord, are we ever going to get a break?

We immediately fell on our knees and prayed. Then we stood up and got our immediate family to pray. Then we got our church to pray. Then we got anyone who would listen to pray! And you know what? That storm missed us! And then we had two weeks of the nicest weather we've ever had in the middle of winter. The umbrella (i.e. covered arena) was able to be constructed during that time and now stands as a testament to God's faithfulness, even in the midst of adversity! We had taken a leap o' faith into the storm and to God be the glory! 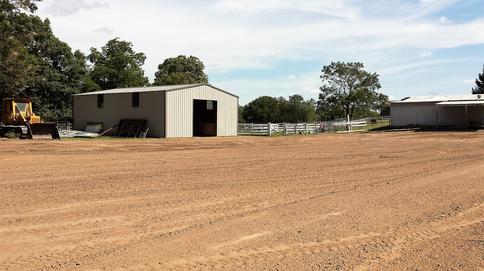 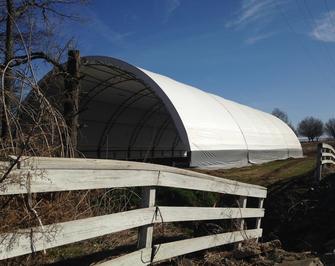